let’s ride the wave of the unknown artist babe 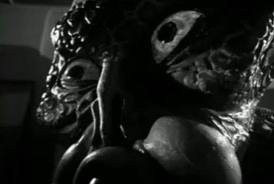 The Outer Limits (1963): The Architects of Fear

I opened Jeff Herman’s Guide to BOOK PUBLISHERS, EDITORS & LITERARY AGENTS 2008.  I turned to page 249 and counted 10 words to the word LARGEST. This is the word I goggle searched finding three images that quickly caught my attention: something cosmic, something I would never look at and something despicable.

In a quasar 12 billion light years from here the largest amount of water has been found. Katie Price is a fashion model writer who seems to have achieved the largest book signing in the Guinness World Records. In 1991 the largest oil spill was 11,000,000 bbl and this was during the Gulf War!

Congratulations and I could have read more about Katie Price but the more I did the more sick I became. This gal uses the media to focus on her and the sad thing is that the rest of the world seems to focus back on her.  She is an illusion of beauty and has a need for acknowledgement. The usual Viagra for old farts to feel young again. Her writing in truth has no depth but she has lots of money to buy a ghost writer… let’s ride the wave of the unknown artist babe!!!

Did they really have to find this quasar to realize there is water out there? Is it the largest fairy tale for them to realize; as the treasure at the end of the rainbow? What good does this information do for the ghost writer who has a mortgage to pay?

The oil goes back to the earth mother from ancient decaying life. I keep saying,

“It is the holy crescent of life and civilization! Why the hell do we focus on fighting there? Fight for the oil and we lose the oil. Kill people so other people can drive their big fucking trucks and SUVs?

So the word ‘largest’ is the word that came forth in my life today. I learned a few things and strengthened some old feelings. Quasars are fantastic; Katie Price has a body with lots of air in her head and hopefully there is a largest collection of oil out there in the cosmos for ghost writers to write about.  This is for all of our smartass scientists /astronomers!!! 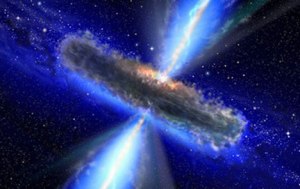 This entry was posted in "In the beginning there was a void except for the written word." The Avengers (Band) and tagged Hudley Flipside, postaday, science, Subculture, Women. Bookmark the permalink.