Flopside cOmics supports the political satire of ‘Trump Baby’ blimp to fly over London.’ On Friday the 13th, 2018. 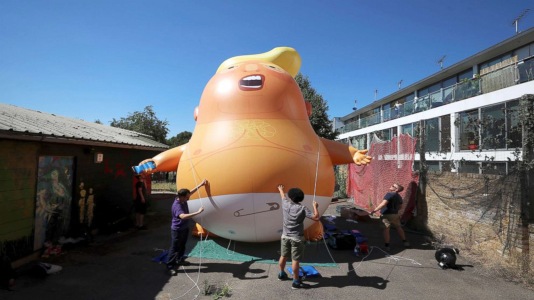 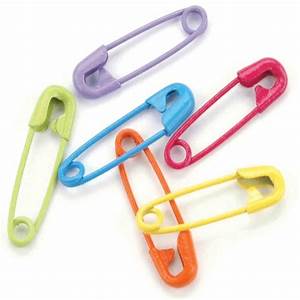 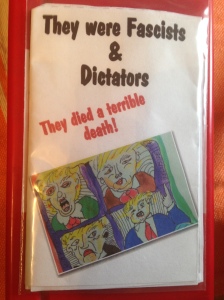 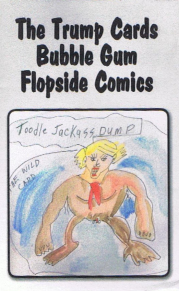 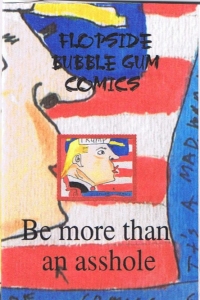 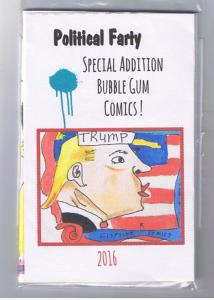 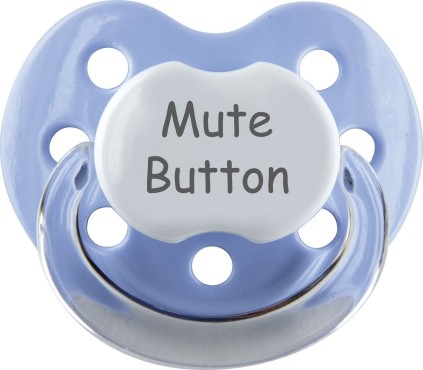 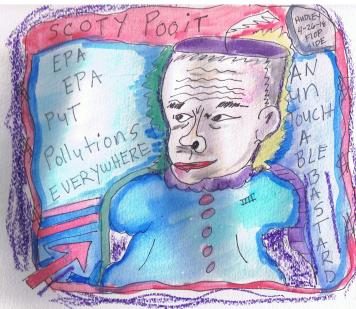 Lotion on your bottom

Sleeping in a used bed

Will not get you any respect

lost in your gloom

To Jeff “THE WEASEL” Sessions and To Donald “JACKASS” Trump…

As told to us by Mr. Shit~ anarchist, atheist with a loving good conscience and beyond….

Mr. Shit woke up this morning with something on his mind. For an old punk with dementia he can be as sharp as a dull knife. He talked about whirling triangles that spoke of “…four combinations of wisdom,” and he talked about how he was part of the fifth part of the whirling triangle equation. “Me, Juno the Asteroid Goddess and the naked Grace AGLAEA.” He told us that it was a puzzle to him and as symbolic as hell or heaven… yet seemed as real as could be!

He told us about the strange dream. He also told us how he was born. He yelled that he remembered his story and yelled this, “He was born from a woman, in an alley, on a bus crossing a border.” This came to his mind because in his vision / dream AGLAEA told Mr. Shit that, “I (she) was born from the thought of Apollo the Hermaphrodite!”  Mr. Shit also told us that Juno said she was born from chaos. Singing that, “She stands up for Women’s rights!”

Mr. Shit told us that in his dream he was in an alley. He walked up to a trash can. He saw many things there, yet a couple of books were glowing. He opened one of the books and he read…

“Visit orphans and widows in their distress~ James 1:27” and again flipped through the book and read, “Thus says the Lord: Do Justice and righteousness and deliver from the hand of the oppressor him who has been robbed. And do no wrong or violence to the resident alien, the fatherless, and the widow, nor shed innocent blood in their place.” ~ Jeremiah 22:3

He flipped through another book. He read an outlined quote.

“Have you considered him who calls the judgment a lie? That is the one who treats the orphan with harshness, And does not urge (others) to feed the poor. ~ (107:1-3) Holy Our ‘an.

In his dream he fell back and one of the books fell with him because the whirling triangles moved about him. He was dizzy with wonder. Yet a strength held him up with two large green rough legs. Like claws from another mother. She told Mr. Shit about the exodus of all people, animals, and creatures of the earth… and beyond. This is a mantra that we need all remember.

“You shall not wrong a stranger or oppress him, for you were strangers in the land of Egypt.” ~ Exodus 22:23

Silence moved upon us all as we sipped our cold ice-teas. We will focus on the quotes from those books from the trash can! For coming upon us are days of justice and good conscience.

Mr. Shit drank lots of ice coffee. He told us that going back to sleep was not an option! 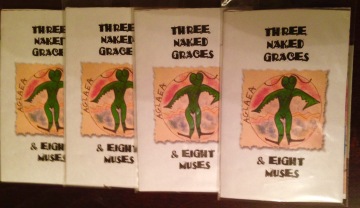 Number 12 ~ An inspirational FLOPSIDE COMIC…. where is the human mind these days……? Are we only listening to a mad man who is trying to fuck up the world or we going to take some time to?

Mr. Timothy Leary I am only pulling your leg up there in the starry sky. Yet sometimes we got to think about the big picture and who is really running the show…. it isn’t LSD it is better than that because it is the Graces and the Muses…. time for some inspiration…. this little bubble gum comic will be on the market soon…. 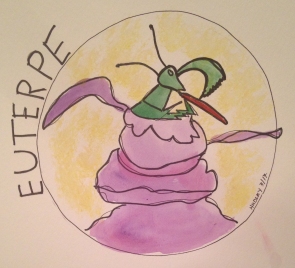 This is an older Flopisde Comic… when life was a lot faster and the night was “always young!” The “Dancing One” was initiated by the ancient worm at the bottom of a bottle. More than that he could not stop dancing. Even Mr. Fuck had a difficult time keeping up with “twinkle toes.”  The “Wild Card” was the man about town. Time to get him dancing again.

A point: So we at Flipside Comics need a kick in the butt too…. the song below is a very silly one and we don’t take it seriously…  it is a ridiculous song. If Mr. Fuck was to take it seriously he would be on the side of the pagans… a crusade of pagans against the Christians. An over all perspective might be the good FLOPSIDE people on a crusade against the Trumpians !!! RAMBO says just dance…

An Untouchable Bastard…? Maybe not but we will see. The stereotype of  abuse by federal leadership !  Everyone to blame but me. So sick that we at Flopside Comics had to do a little “You’re a Bastard Editorial…”

I guess it all comes down to this, that no one with any good sense or decency really wants to work with the Trump White House. A world of fucking decadence and scummity ! (New word ) 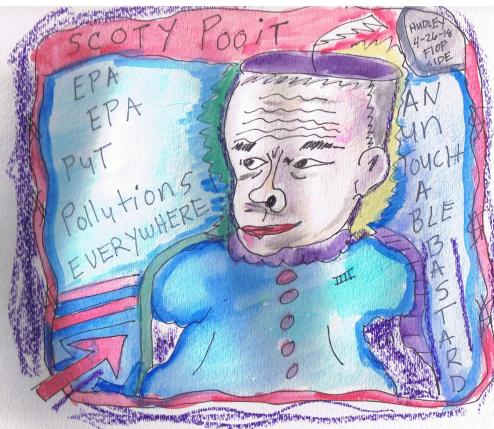 Remember Flopside Comics are stupid like the flawed human experience and we can make fun of it cause it sucks!

Nearly all men can stand adversity, but if you want to test a man’s character, give him power. ~Abraham Lincoln

The United States, the State of the Union Address… some don’t care and some are  going to boycott the event. Others will watch like us at FLOPSIDE Comics. The theater of the trumpsurd!!! So Mr. Shit came up with this in his sleep. We listened as he snored and talked in his sleep. Mr. Shit said…

“The State of the Union Address… the Address… a dress.”

Mr. Shit gave us a cleaver idea while he was deep in his sleep and talking in his sleep!  He is an elder punk with dementia. Mr. Garbage listens closely to his wisdom and said it clearly to Mr. Fuck,

We smiled and then went to have a round of coffee. Today we will put on our best party dresses and listen to the addresses….

No man has a good enough memory to be a successful liar. ~Abraham Lincoln

At home I like to have projects to do. Husband got me a new book called Asteroid Goddesses by Demetra George & Douglas Bloch.  It is a networking book that ties up so many years of study. Astronomy, astrology, spirituality, mythology and psychology. A remarkable book. It reads well. I like to engage in mythology, so I did up a little water-color fun with four of the main players heavenwards. What a fun project !! Some female asteroids that have a powerful punch to the human psyche. We need it.

Is she a strong woman or is she just a strong human being ?! I say both. We at Flopside COmics don’t like separating the men from the women but in this case just once we agree that she is one hell of a dame. Thank You !!!

Woman of the Century…. here we gave her a Tiara !! 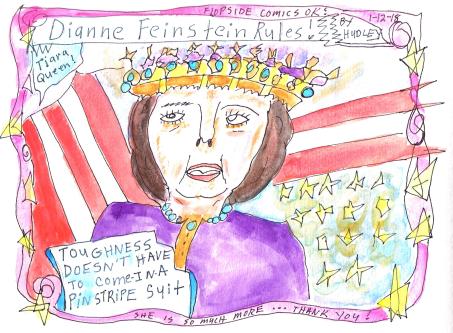 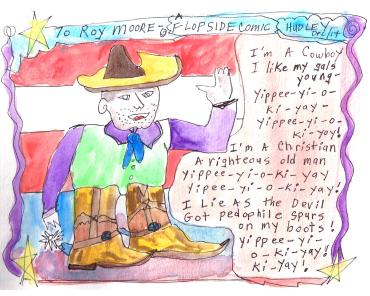 HEY YOU !! My Intellectual property. All material on this site belongs to me Hudley Flipside aka Holly D. Cornell. If you want to share ask me first …. (unless identified as other)