“PhDs Pertaining to Punk & beyond …

I will describe punk rock using a motif, a punk mandala. In the center is experience. A wildfire consumes this image with the creative spark of music, authentic voices, and the written word. Slowly an artistic and musical expression starts to crystallize.

I am a punk, a pesky weed. Los Angeles Flipside Fanzine is the “archival method’. Documentation of the underground punk scene and the bands are the “interstices.’ “repository or a collection of musical [fucking loud] rebellious voices.”

SESSION 17B: ARCHIVING LOS ANGELES AND THE ART OF POETRY AND MEMORY

The focus of this two-day event by the Musical Humanities is “on the interstices of punk and archive.” The conferences focus is on “documenting punk musically” and “how sound repertories and archival practices can give shape to the lived contours of diversity across scale.”

Los Angeles Flipside Fanzine published from 1977 to the year 2000 and then transformed into a new fanzine following its demise. Todd Taylor, creator of the fanzine Razorcake, took the Flipside format and his experience working as an editor on Flipside and continued forward.

The punks’ documented their scene. For Flipside it was a natural and unpretentious evolution.  Flipside grew as the underground punk scene grew. With all the crazy turns that the original scene took through the years it did develop into the monster or genre that it is today. I like to imagine that we at Los Angeles Flipside Fanzine helped in that process.

The experience of the light and the logos of punk rock inspires professors and artists right now. This is also being the spirit of punk. It is a needed experience, or a call to integrity and the honesty of creative rebellion, that questions the status quo.

I will describe punk rock using a motif, a punk mandala. In the center is experience. A wildfire consumes this image with the creative spark of music, authentic voices, and the written word. Slowly an artistic and musical expression starts to crystallize.

Any variable that moves through this motif, this punk mandala is like a quark or grain of sand representing the unique qualities of rebellion and “diversity across scale.” Examples of this are the themes of doing it yourself, experimentation, thrilling, exciting and fun as hell.

For most punks it was learning as you were doing it because at the beginning no one defined what we were experiencing. A time when no person had yet coined the term punk, or punk rock. There was not a classification between new wave, punk rock or underground. The beginning of punk is the center of the motif, a punk mandala of experience. “the interstices,” the private and sacred conversation of punks.

Flipside Fanzine started publishing during the early Los Angeles Scene. The first issue to the last issue was a 20-year life span. Flipside documented the underground music scene. Capturing the center of the punk mandala and never letting it go. Flipside grew up with this musical underground scene.

The Flipside Ten Year Anniversary issue captures the experience of punk rock from 1977 to 1987. Starting in Los Angeles and expanding outwards to the global community of fans, bands, promoters, and fast-growing record labels. Here is how punk crystallized into a musical genre.

The experience of the light and the logos of punk rock inspires professors and artists right now. It is this needed experience, or a call to integrity and the honesty of creative rebellion, that questions the status quo.

What emanates from the Flipside Ten Year Anniversary issue can be defined as bands, fans, and the hubs they created. The Ten-Year Anniversary issue focuses on band interviews with selected punk bands that were popular at that time. Which is the same documentation for each issue, being issue one through issue fifty. The year 1977 to roughly 1987. Each listing of an Issue from the 10-year anniversary issue includes the date of the issue, press run, the cost, staff people and current editorial. Under each edition of Flipside is a picture of the cover and under this song lyrics. This capturing of a song was entirely inspirational for us at that time and place of punk rock. Each issue begins with a Flipside editorial that pinpoints the current heartbeat of punk at that time.

I have chosen 5 samples from the ten-year anniversary issue which reveals a punk archival method curated by Flipside Fanzine. The images shared are not afraid to show their patina revealing the age of punk. The essence of punk lives on.

I archived Issue 54 several ways. I have the original Flipside Fanzine in plastic folder. This same material is now saved on my computers by way of a scanned PDF file. I also have this on CD and a few flash drives. I share lots of my Flipside material on my web site too. The issue has 224 pages.

The bands Flipside Fanzine interviewed had something to say. The ten-year anniversary issue does not include the overwhelming involvement of the whole underground scene. Such as the classified advertisements, record reviews or letter section. It does highlight a few bands from each of the fifty issues.

I will begin with an opening introduction, a few paragraphs from the 10-year anniversary editorial. (Image below paper and images viewed from Los Angeles Flipside Fanzine are from PDF file of the issue)

Another focus of my presentation is an unusual part of punk rock history. The punk advertisements. There are several included in the 10 Year Anniversary Issue. These advertisers were current around the time of punk rock 1986 -87. Most all the ads are record labels and / or distributors. This history shows a face of the growing punk scene. Bands were forming!  New underground independent record labels started up camp. All wanting a piece of the action.

Popular and strong at the time were Touch and Go, Alternative Tentacles, and SST Records. Also, an interesting one is Homestead Records. Homestead Records and its parent company, music distributor, Dutch East India Trading.  A local popular growing record label in California was BYO Records and Toxic Shock.  The advertisements are art forms and express a time when the US Post Office and local distribution were key to getting the punk fans their music addiction.

All issues of Flipside were created and edited in a bedroom. All images were done in our dark room.  Either in the garage or another room converted into a darkroom. The United States Post Office was our official place to collect money and advertisements. Issue 54 was created via back issues and new advertisements. The Commodore 128 and HP Laser Printer was the current technology that made this issue happen. The inside newsprint paper was printed at the Glendale Rotary Offset Printers and the glossy cover was printed at another printer. The paper and the cover were married together.

What we did was simple. We supported and promoted bands. The fanzine and promoters and record labels worked tightly together. Punks once were isolated, lonely, and rebellious so we created our own hubs. No one told us what to do.

It is kind of ironical for me to be here. At UCLA. I think creator Al Flipside would call me oxymoronic. Maybe I am.  I hold that conflict within me. Yet it is not about what Al Flipside, or I think. It is the documentation; a punk underground history is contained within each issue of Flipside Fanzine. Los Angeles Flipside fanzine tells an honest story. It is an original source that documents youthful rebellion. A punk mandala of experience.

We were all so young then and learning as we went on. Running a business was not so professional as it was inspired. Some of these underground punk hubs continued and others like Flipside Fanzine died off. The Flipside Fanzine # 54 Ten Year Anniversary Issue is a profound source for viewing the original explosion of a vast growing punk culture.

Taking the back door into UCLA or remember sneaking in the bathroom window to get into shows for free? 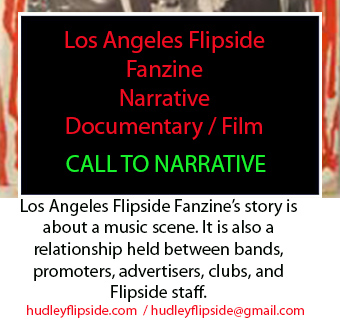