Once I knew only darkness and stillness… my life was without past or future… but a little word from the fingers of another fell into my hand that clutched at emptiness, and my heart leaped to the rapture of living.~ Helen Keller

The Twilight Zone can be pleasant before sunset when the sky sometimes bursts forth with color which should only be part of our dreams.  Shadowy faces from light and shadow play move on trees and in corners of our streets. Glen told me once if you look into this type of twilight without focus and expand your vision to include you peripheral vision, a world of nature spirits will open up to you. One can do this on stormy cloudy days as today.  Yet the twilight zone story that I am going to share is a focus around a charterer who almost got caught in this place between light and dark; where escape seemed improbably negative. The experience lasted a year.

After a negative reaction to a drug the women seemed agitated and unable to lie down. She got up and tried to take a shower in her hospital room. Then the thought of running and jumping out the window seemed the logical thing to do. They stopped and sedated her. She was only in the hospital for a normal hospital colonoscopy. Something went terribly wrong and she ended up staying in the hospital for two days. Before leaving, a morning nurse accidentally gave her some Prozac. Maybe the supervising doctor thought she was crazy? Regardless, without a psychological evaluation the unescapable twilight zone began.

On the couch at home lights moved through her body, she experienced an electrical storm shooting up and down her spine. Anxiety crept up around her as a succubus that never left her side; He stretched out a large woven black sheet above her. It rested above the trees and over her life. Always waiting for something to come… she felt the twilight zone ever-present.

“Nurse I am so anxious, I think I will lose my mind.” She said to the nurse on the phone.

“Take deep breaths. A powerful drug has been released into your body.”

The battle for her mind began; throwing away all prescription drugs from stupid doctors: that made her feel crazy and in the toilet they went.  She walked, took homeopathic remedies, herbs and waited for the opaque Madonna to make her first attack.

“Will I ever feel normal again?” She said to herself.

Her will alone brought her back slowly.

The dark illuminating entity that mocked her unfeeling steps was slowly replaced by light. In her dark mind a knowing grasped her that was just the opposite of a gamma-ray explosion; for it was the core of a cold etching, calculating, scientific, and faithless mind.

Though she could not focus in to watch TV for weeks, she slowly began to watch sitcoms. The humor, family problems and stupid antics of Tim Taylor from the series Home Improvement chased the boogie man away. Friendly books off dusty shelves and talking her walks in nature also helped her out of the dark twilight zone. The feelings of a normal life began to move her. Music, live music, dancing and beer gave her the gifts of beautiful rituals! Once again she felt the loving and beating hearts of her children.

“The rapture of living.” 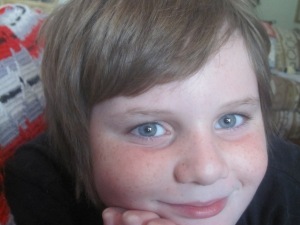