It was a world of mostly boys. It was a time of the real Mad Men. I was born in the 1950s. All Thanksgivings, until I was in my thirties, were celebrated at the same place every year. Uncle Royal and Aunt Louise lived on a beautiful farm in Orange County California. Acres housed pomegranates, tangerine, and avocado trees.

As kids we ate all of them until our hearts content. Knots Berry Farm was only a few miles away, being a small amusement park, where we would chase chickens around before they were caught, butchered, and fried up. It was a country fair more than the multi-media corporation it has become today.

Turkey was put into the oven early and mom did most of the cooking. Louise always baked up her famous mini-pumpkin pies. She put in all the pie ingredients together so whimsically fast before you knew it a warm pie tin was in our hands.

The most delicious pie I ever had. It was because her crust was perfect; I think this pissed off mom because she never could get a good pie crust down like my aunt did. Louise talked while she baked until your head felt like it would explode.

I had a huge family of realities that came to dinner. The adults played poker after the meal was over. It was not family poker it was nasty ruthless cards. Dad was not the only one to get rip-snorting drunk, but he was most likely the loudest.

I remember once he danced like a Native American in the kitchen, as Royal made up his famous hot-buttered Rum cocktails. We would follow dad around mimicking his moves to the irritation of my mother who knew he was plastered; at the time I thought he was just having fun. Maybe it was a little of both.

Royal always had a glint in his eyes while smoking his cigar. The night held sounds of quiet, then yelling depending on the hand of the game. The kids outside played kick-the-can, or sometimes we threw tangerines at passing cars, while hidden in the large branches of avocado trees; hearing knocking at the door while panting with older cousins but never confessing to the accusations of these strangers whose cars showed the damage.

Mom always made time to play poker with the men. Sometimes I rested against her warmth while she silently played the game.

Thanksgivings are much smaller now and Turkey is not always invited. This year my two kids and I are going to go out for sushi. It is hard to believe that the freedom I feel now is based on the control of a family long ago, but it is true.

It was nice to be part of such a big family then, but I like it much better now. I think I will smoke a cigar this year in memory of Uncle Royal and Aunt Louise.

As I smoke the cigar I will watch the smoke whirling up to them, imagining where they are with the great mystery of death,  and similar to the inspiration of a Native American Indian prayer I will evoke  their spirits in gratitude by saying,

“Thank you Louise and Royal for the memories, and for the old farm-house with the steep slanted stairs that led up to the room where Grandmother haunted us kids! Thank You for the delicious Turkey skin, mashed potatoes and stuffing  galore. “

Happy Thanksgiving to family and friends…. 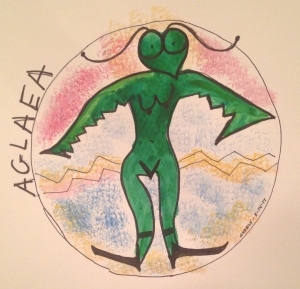