A depth in character that slaps the face of my unconscious. I like it that way. ~ Hudley 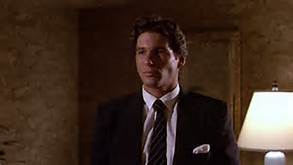 It is not just his good looks or notorious backlash of gossip that follows the real man.  As a alumnae of Los Angeles Valley College, he projects what it is to be a man in our modern age; so ruthlessly and graciously. As the young buck ready to fuck, to the reporter caught up in a mystery of life, to the man betrayed by his wife; he is a portrayal of the modern man. I am sick of super heroes… which is why I have moved back towards watching  film Noir!! The men, like Richard Gere’s characters, are paradoxical, graceful if not down right ugly/ beautiful. They walk between light and shadow and are motivated by hate/love!

Alonzo D. Emmerich: Oh, there’s nothing so different about them. After all, crime is only… a left-handed form of human endeavor.