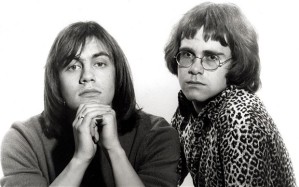 “And we went to California and up and down the Pacific Coast for a day and a half, settling at last on the sands of Malibu to cook wieners at night. Dad was always listening or singing or watching things on all sides of him, holding onto things as if the world were a centrifuge going so swiftly that he might be flung off away from us at any instant.”~ Ray Bradbury. The Rocket Man

Rocket Man explained a lot about Elton John that confused me since 1975. I love autobiographical stories and memoirs. What a joy! Elton John shared his psyche with the world. A healed psyche that was given more then a second chance.

The film has that real deal 1970s thing going that sprang forth from the late 1960s. The chance that two genius dudes like Elton John and Bernie Taupin found each other is amazing. So grateful! I enjoyed the integrity, depth and darkness shared in this film. The world of rock & roll was not romanticized.

Fun musical choreographed dance scenes moved through the film. Bernie Taupin’s lyrics enhanced by being sung clearly and slowly made me want to sing and dance along.

I love Elton John and Bernie Taupin’s music especially the years between 1971-1974. I include in this review a conclusion with an early song written 1971 entitled Friends.  I think the song Friends was a song of amazing foresight. As if Bernie knew the journey ahead would be a difficult one. Especially for Reginald Kenneth Dwight!

“Friends is a 1971 teen-romance film directed and produced by Lewis Gilbert and written by Gilbert, Vernon Harris, and Jack Russell. The soundtrack, with music composed by Elton John and Paul Buckmaster, and lyrics written by Bernie Taupin, was released as the Friends album, and John’s recording of the title selection charted when released as a single in the United States.”

Posted in 70s flicks or films of depth where with impossibilities comes love...