Old Mr. Shit has dementia but this does not take away from his wise foresight… 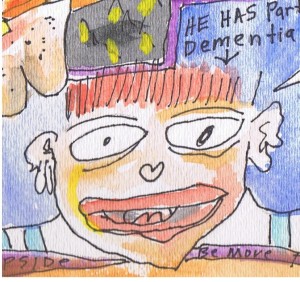 Mr. Shit is not giving us new news… but old timer punker shit funny news… he is a good guy lost in a radical world of things clear but far away… genius but a bit off…

Outside as we enjoyed the fresh morning air with a fine cup of fresh brewed coffee. Mr. Squirrel was screaking and shaking his tail. Mrs. Crow let out a great yell. The breeze is here bringing in autumn and some good creative foresight too. And then Mr. Shit shared his noise with me. Mr. Squirrel and Mrs. Crow too,

“Trumpty Dumpty sat on THE wall

Trumpty Dumpty had a great fall

And all his unpaid lawyers

Didn’t want to put him the ASSHOLE-A

I spit out my coffee while Mrs. Crow flew overhead. I looked ’round and Mr. Squirrel was silent as if dead.