I awoke this morning thinking about my grandmother on my paternal side. She was quite the gal. She drove all the way out from Pittsburgh Pennsylvanian, with her family, and invested in the Santa Monica Pier. She had food-stands on or near the pier where she sold different items such as pineapple and cold water taffy. I heard a story once where she got her hand caught in a taffy stretching machine. She came to own and run a restaurant on the pier called the Purple Cow. 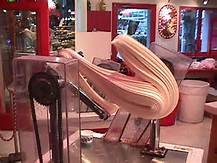 She reminds me of the character from the 1945 film Mildred Pierce. NO she was not involved in a murder because she was much more inventive and practical and was married to the same man all her life. Yet my grandmother was an epicurean entrepreneur and a genius at what she did. All her wealth she moved into purchasing land in the San Fernando Valley. She owned a farm in the Santa Monica Mountains too. She invested in her children’s future  helping them all to reach for their dreams. By the time I came around most of her financial wealth and creative spark was gone due to the usual metamorphose of change, age and a new generation.