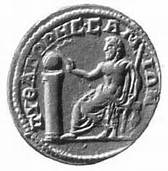 Bronze coin naming Pythagoras, and showing him placing a wand against a celestial globe, were issued on the island of Samos during the 2nd and 3rd centuries A.D.

Found a good book that I have been looking for, a book that balances out my oldest son’s intense math and youngest son’s second semester of geometry. PYTHAGORAS, His Life and Teachings by Thomas Stanley. The Preface is by the esoteric genius Manly P. Hall. 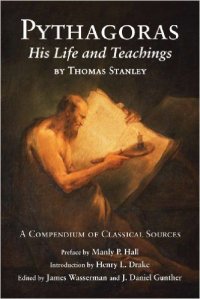 I was looking up images of PYTHAGORAS on-line when the book came to my attention.  I almost gave up looking for it. Written by Thomas Stanley who lived in the 16th century. An intelligent and privileged individual; that this book survived into the 21 century is a mystery, considering the vast rogue wave of change that the world went through at that time. 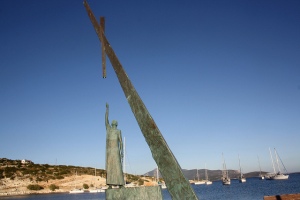 The Ceramicus in Athens, Greece, there stands a monument popularly believed to be the Tomb of Pythagoras. A white limestone shaft is supported by a platform of four receding squares. The monument has been the subject of considerable speculation by those concerned with Pythagorean symbolism.

@ The cemetery was also where the Ηiera Hodos ( http://madeinatlantis.com/athens/sacred_way.htm )(the Sacred Way, i.e. the road to Eleusis) began, along which the procession moved for the Eleusinian Mysteries. The quarter was located there because of the abundance of clay mud carried over by the Eridanos River.

Posted in the Esoteric heart beat...