A Cold Wind in August (1961) is a low-budget independent film directed by Alexander Singer and adapted from the eponymous novel by Burton Wohl. The film stars a Lola Albright as a mentally unbalanced burlesque show stripper in her thirties who becomes involved in a torrid romance with a 17-year old boy played by Scott Marlowe 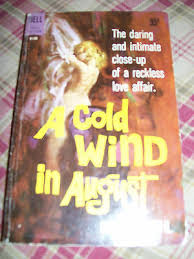 Netflix and their unknown B movies always are the best. B movies seem more realistic to me and down to earth. This is a delightful little story about a short romance. A young man Vito is just finding his sexuality and an older woman Iris is slowly losing the charm of a once very provocative and talented life.

She is learning to make the usual compromises when her air-conditioning goes out. The father superintendent is too tiered to go to the room where the beautiful woman is, so he sends his son. Papa Perugino is a wise man. He wears his insight on his face at the beginning of the film, and it turns out to be true.  I think this film incorporates romance and intimacy very well. It leaves a lot to the imagination but the passions show on the faces of the actors. It is very believable. The characters in the film are earthy and the environment in the city is symbolically hot, and the drinks are extremely refreshing. The ending of this film is predictable but understandable. All and all this film takes you away to a nice little romance that flares up and cools down. I look forward to viewing it again. 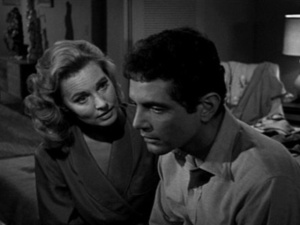 The Flight That Disappeared (1961)

A transcontinental flight from Los Angeles to Washington DC, carrying three top scientists, unexplained begins a climb to 10 miles up. With all other passengers unconscious, the scientists find themselves in a dimension where time does not exist. There they are put on trial by citizens of the future for their potential involvement in the creation of “the ultimate weapon.” Written by Ray Hamel <hamel@primate.wisc.edu> http://www.imdb.com/title/tt0054881/

I passed by this film a few times. It is Sunday so I took a chance. I love when I do this because I always find some interesting B movies that are better then most films coming out today. The Flight That Disappeared has that melodrama drive-in movie feel to it. I like that. The message of the film has a powerful anti-nuclear weapons motif. The big film Contact written by Carol Sagon kind of rips this film off, if only indirectly. SO here we go…the future comes to the present, out of time and space, to warn us about the destructive forces of building weapons used in war that are fucking insane. Happily the scientists and lobbyists come to their senses and listen to what has been told to them and destroy all of their notes. I wish this was the case in the real world. The three main characters have a dream, similar to a near death experience, and see the destruction of life on this planet; A scientist, a mathematician and a scientist/ lobbyist.  The mathematician is a sexy dame too with a beauty mark above her left cheek. Smart, pretty but not too quick. Sorry no sex scenes in the bathroom and no waitresses with push-up bras.

Just a good old B movie with a profound message to us present day earthlings from the masters of the cosmos. They may be speaking to you!!!